They say that Salafism is the new youth culture for Muslims in Germany. That was not always the case.

When we were really young we only wanted one thing: to be free. We loved our Turkish, Arab, or Kurdish culture, our Islamic, Alevi, our Maghreb, Afghan and Anatolian traditions – but we wanted to express them on our own terms – as they are in a modern society.

Since we had strict parents, regardless of whether we were Alevi, Sunni, Arabic, or Kurdish, we – especially girls – had to hide much of our lives. And that was not easy. When we were heartbroken we locked ourselves up in our rooms and we could not talk to our parents about it.

We looked for ways to get out of the house in the evenings – we begged our parents for every hour that we spent away from home. We did not want to give in; we wanted to break through the prevailing social norms.

In the days before mobile phones, the guys always had coins in their hands to call us on our home phone, in the hope that we would pick up and they would hear our voices, and not one of our parents. We wrote love letters and painstakingly hid them at home.

We girls thought about what it would be like if we were lesbian – without our parents noticing it. We could have spent as much time with our long-term girlfriend as we wanted – she could hang out at our house, go on holiday with us and we could even move in together after finishing school.

We spent a lot of time dreaming. We also dreamt about what life would be like for the next generations. We often asked ourselves whether they would have more freedom than us. We hoped so. We hoped that we could be as free as our “German” friends – so free that we could hold hands in the street, without worrying that an uncle or one of our father’s friends would catch us. We just wanted to be young.

And we fought for it.

We were constantly branded “foreigners”, the distinctions were clear. What was possible for the Germans was not possible for us. We never rejected their values. We were just annoyed that the Germans did so little with their freedom. We would have done more with it.

Then some of us noticed that there was no ray of hope, that they were simply punished if they broke the prevailing social norms of the Muslim communities. As the most beautiful, most self-assured and coolest Moroccan girls got married at the age of 16, when the freedom-loving and rebellious girlfriend had to marry her cousin after graduating from school and subsequently took her own life, as only a few managed to have an autonomous, free and open life – without cutting off your parents, or being a “bad Muslim” or “dishonourable”. That was when you started to conform. Conform to the expectations of your parents. And your youth was over.

In the end the boundaries became blurred

Whilst our parents, our aunts and uncles had been socialized in Turkey, Morocco, Afghanistan and Algeria, and always felt strongly connected to their homeland, their traditions and norms – this was no longer the natural course for us. We were born in this country, but for us – it was like this for everyone, even for “the Germans” – different rules applied, and there were different expectations. We were overwhelmed; not only with homework and visits from our loving relatives, not only with the summer holidays in our Middle Eastern homelands where we were also stigmatized and harassed, but also with helping our parents with translations with German authorities – but also something more, we were overwhelmed with explaining, justifying and excusing ourselves.

We had to constantly apologize for who we were and what we wanted to be.

This injustice hurt the most. In our hearts, we felt a twinge every time we realized the limits which came too close to our dreams. We lived in fear. Fear of being caught. Fear of being punished. Fear of what reproaches we would be confronted with this time. We just wanted to be young. We wanted to be free. “We foreigners” stuck together, we showed solidarity when our bourgeois classmates failed. We had created our own world. We became friends because of our cultural identity, because we had our own different cultures – starting at school, where we came into contact with the German middle class and so did not have much to do with our cosmopolitan and transnational identity. And it was not our religion which was our identity. It was our common goal, our pursuit of freedom, of acceptance, of recognition. From our own community as well as from the German world. And when our teacher asked us what jobs our grandfathers had, we three “Turks” were the only ones whose grandparents had not even finished school. But we realized that it did not bother us. It turned out that not only in maths and physics, but also in ethics, history and German, our grades were much better than those whose grandfathers had been doctors or teachers.

We were newcomers. We had no idea what price we had to pay for that.

We listened to Hip Hop, we loved Pharrel Williams – long before the middle-class students did. We mourned for Tupac and Aaliyah. We knew American slang and so we chose to study advanced English. That was our youth. We had very few role models in the German media or in the public eye to show us a way to reconcile the expectations of our parents and our community with the expectations of society. We did not feel like victims, but we were marginalized and at some point this made us into victims.

We always waited for the summer: the guys had been working out, the girls had been dieting because we knew we’d meet at the pool in bikinis and swimwear. And if we managed to, we wanted to graduate from school, we wanted to study, we wanted to get out into the world. That was our world. And we hoped that the next generation would lead lives which were even more open, free, and modern. That the next generation would break down social norms. That they did not have to become “German”, but could become freer. “That they would be allowed to do more.”

To be allowed – that was one of the phrases we used most regularly.

We did not just want to consume a modern lifestyle, with our Reebok shoes, Nokia phones and Nike trousers. We wanted all the other things which went alongside. We tried to imitate Jennifer Lopez. Her style, her hair – her world from “Jenny From the Block” could become our world. And while Lil Jon and Ludacris were rapping “Move Bitch” on the car radio we smiled gratefully that our parents could not understand English.

The names of our male friends were stored in our mobile phones as German women’s names: Tarek became Tatjana. We were officially friends with Julians and Christophers, but we weren’t allowed to so much as look at a Milad or Cem. Our parents always trusted German boys more than the sons of their friends and acquaintances.  We never talked about who was a “bad Muslim” – but we always talked about any acquaintance, cousin or friend who had “run away from home”. They just broke out and disappeared because they could no longer cope with the strict rules of their parents and brothers – and when our own parents saw this happening, they panicked. And they suffocated us even more with their love and their fear.

We did not want to be primarily Muslim. We wanted to be free. We wanted to be young. But we noticed that it was becoming difficult for society to accept us for who we were when our identities were so complex.

And we realized that our own community would find it difficult to tolerate the way we wanted to live – freely, openly, critically and autonomously.

We never wanted to live lives of conformity. But our struggle for freedom was not seen, recognized or rewarded. At some point they began to see us in categories.  We had to fight these stereotypes. Years later I had to explain to people I had gone to school with for years why I don’t attend a mosque, why I don’t wear a headscarf.

We had to explain what we thought about 9/11. We were labelled as Germans, although we felt that we were not even accepted as foreigners. Neither by the Germans nor by the foreigners. We were dragged back and forth. Not between tradition and modernity – because we had already decided on modernity – but between the different labels that were given to us. 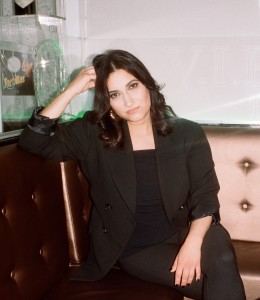